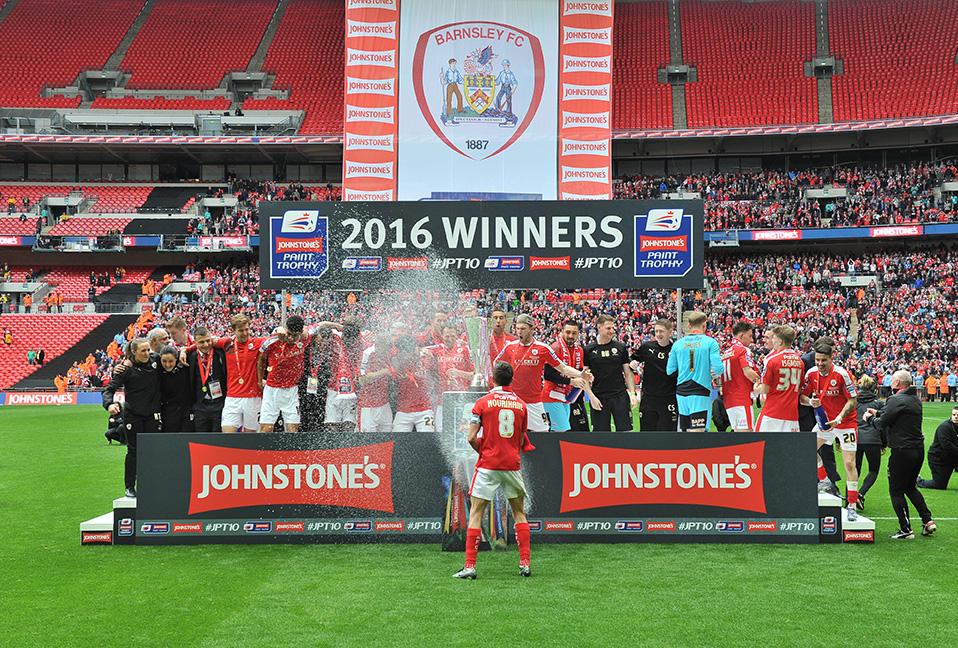 We all love a good David and Goliath story, triumph of the underdog, surprising and unexpected winners… and as Fantastic Media partners (plus my lifelong supported team of choice) Barnsley Football Club are in the throes of the League One play-offs, it was only fitting to look at a Top 10 of shock sporting wins.

Most recently, and possibly the most shocking of the top ten is a victory that will go down in history as probablyÂ the most astonishing, widely enjoyed and most deserved.

Leicester City’s winning the Premier League should be recorded as one of the greatest underdog stories in sporting history. Fighting relegation the previous year, various internal issues with players, even sacking the previous manager in the summer left Leicester City looking as if relegation was a certainty this season. Then Claudio Ranieri arrived to a flurry of raised eyebrows from the so called experts.Â Game by game they’ve proven everybody wrong, apart from those lucky few who had had a flutter on the 5000/1 shots.Â But, even they realisticallyÂ couldn’tÂ believe theirÂ dreams were about to become reality over the course of the 2015/16 season.

2) The Most Unexpected Gold Medal in History, Steve Bradbury (2002)

Now one of Australia’s infamousÂ Olympians, Steven Bradbury, achieved an unexpected gold medal in the short track 1000 metres speed skating event, at the Salt Lake City 2002 Winter Olympic Games. Taking full advantage of a mistake made by his fellow finalists, which caused them to fall, allowing him to skate to victory.

Rank outsider, Bradbury’s chances looked slim from the off, but as the leading quartet took the final bend, Lia Jiajun (CHN) tried a bold overtaking tactic outside Apollo Ohno (USA), sending them both onto the ice and bringing down Mathieu Turcotte (CAN) and Ahn Hyun-soo (KOR) down too.

Subsequently leaving the way clear for a mystified Bradbury to cross the line and claim the most surprising of gold medals.

Underdog contenders, Greece pulled off one of the biggest shocks in football history when they beat hosts and favourites Portugal in the Euro 2004 final. Angelos Charisteas scored after 57 minutes from the Greeks’ first corner, heading in an Angelis Basinas cross.

“It’s a sensation. It was an unusual achievement for Greek football and especially for European football. The team played great football. We took advantage of our chances. The opponent was technically better than us.”

“We ask forgiveness from all the Portuguese because we weren’t able to achieve the goal that we all wanted,” said Scolari.

“It’s hard. It’s hard to lose this way…to play a game this way, without goals. They won defensively. They won because they knew how to play in that way.”

American, Ben Curtis won the 132nd Open Championship in 2003 after a rollercoaster final round at Royal St George’s, which he called “A dream come true.”

Curtis, who was competing in his first-ever major championship and then number 396 in world rankings, became the first debut winner at The Open since Tom Watson in 1975.

Ben Curtis won by one stroke after shooting a 69 to end on one-under-par.

This quote taken directly from www.theguardian.comÂ pretty much says it all really….

“Mike Tyson entered the ring at 9am on 11 February 1990 as the undefeated heavyweight champion of the world. After 10 rounds with Buster Douglas he was lying on the canvas wondering if God had punished him for his magnificence.”

After coming close on four previous occasions, but losing out to Andre Agassi in 1992, and Pete Sampras twice in 1994 and 1998 plus having won only nine matches that year, Croatian born Ivanisevic finally took the title in the Gentleman’s Singles final in 2001.

The 92nd Cup final of the FA Cup took place on 5 May 1973 at Wembley Stadium and saw Second Division Sunderland beat a Don Revie Leeds Utd side, 1-0.

Favourites to win, Leeds lost by a single goal from Ian Porterfield.

Another of the most famous results in FA Cup, and one of the all time classic giant killings, this game is fondly remembered for Ronnie Radford’s strike late in the second half and which pushed the game into extra time, with the score line sitting at 2-2.

The notable extra time victory for Hereford, is one of the biggest in the clubs and the FA Cups history, with Newcastle Utd Â – a potent force at this time – losing to the non-league side. As well as this, it was the first time a non-league club had beaten a top-flight club in a competitive fixture since Yeovil Town’s victory over Sunderland in 1949.

Not necessarily deemed as a shock as the England team at the time were pretty fantastic, however it still makes it into my Top Ten for a great sporting moment, and one that initially sparked interest for me personally, in the world of Cricket.

In 2005, a strong England team made up of in formÂ players such as Michael Vaughan, Kevin Pieterson, Andrew Strauss and who could forget Andrew ‘Freddie’ Flintoff, beat Australia in anÂ Ashes series for the first time since 1987, after a draw in the final Test at The Oval.

Dubbed the “best ever” Ashes series, the country was gripped by the success, with the Queen and Prime Minister Tony Blair leading tributes to captain Michael Vaughan and his victorious team after the game.

The players celebrated in style with Freddie Flintoff, quite rightly,Â famously embarking on a 24 hour drinking session and enjoying the victory.

After what has been described as one of the best, and worst seasons in the clubs history, League 1 club Barnsley FC find themselves in the promotion play-off finals, against Walsall, following a 4-1 thrashing of Champions Wigan to secure the place. Barnsley had to win the last game of the season away at Wigan, to leapfrog Scunthorpe into 6th Place.

The season has been a turbulent one to say the least, remarkably transforming a side that were bottom of League one on 28th November 2015 to now (May 2016) promotion contenders.

‘What doesn’t kill you makes you stronger.’ Â

The future began to look brighter then, as the club enjoyed a magnificent run of 10 wins from 12 league games, a 360 degree turn around from enduring 8 straight loses not a few months previously.

February 2016 saw the departure of Head Coach Lee Johnson which was another knock to the now strong, stable team, who had just secured a spot at Wembley in the Johnson Paint Trophy Cup Final (that very day).

But this was short lived as caretaker manager Paul Heckingbottom took strength from adversity and steered the team to the Johnson Paint Trophy victory at Wembley and League 1 playoff finals.

Only time will tell the outcome of the remaining games, which could result in a possible second trip to Wembley, something even the most avid tykes fan couldn’t imagine at the beginning of the 2015/16 season.

One thing is for sure, whether the team remain in League 1 or are playing Championship football next season, as a true supporter of my local club Barnsley FC, this season has been COSMIC!